The Hungering Deep is the first DLC for Sea of Thieves. It was released on May 29, 2018.

This content update introduces and showcases a raft of new features that will persist in Sea of Thieves beyond Merrick's story and its time-limited campaign. (From the patch notes ) 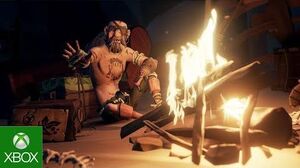 Note: Players who have completed the first steps with Merrick on Shark Bait Cove can join a group and gain the achievement, the Figurehead, and the Shark Bite scar for killing the Hungering One as long as there were enough drum owners at the location to summon the creature. Merrick will acknowledge that the player killed it without his help when they return to him. To gain the drum and finish the DLC however, players will still need to read the other journals at some point and then return to Merrick once more.

Add a photo to this gallery
Retrieved from "https://seaofthieves-archive.fandom.com/wiki/The_Hungering_Deep?oldid=6722"
Community content is available under CC-BY-SA unless otherwise noted.